Naema El Hami is all ‘qlbi’ or heart. Her story is a familiar one in Morocco where women of her generation were not sent to school because families did not see the value of an education for their daughters. Naema only attended school until the second grade when she was a mere 8-years old.

The unstoppable 52-year old mother of three is a local who was born and raised in Oued Zem, home to the Flying Camel Training Center and a city in Khouribga Province situated southwest of the Moroccan capital of Rabat. A true ‘Ouedzemiya,’ Naema learned to weave from her mom who spun her magic on a traditional wood loom known as a ‘minsij.’ She continued her training at the local ‘neddy’ a Moroccan training center where she learned embroidery, sewing, Rhonda traditional stitching, point de croix and hand stitching. She picked up additional skills from neighbors and friends ‘swiya b swiya’–‘little by little.’

Flying Camel Workshop Manager Kenza introduced her neighbor Naema to Mushmina as she has with many of the other artisans. When she first started with Mushmina in 2010, Naema hand-stitched scarves and wallets. A skilled and ambitious weaver, she worked on the embroidered pillow order for retailer Anthropologie in 2012.

Naema, a practical woman, realizes that her craft is also the means to earn ‘Floose!!’ (Money), she says as she laughs and a better way of life for her family. She can pay for things herself now and does not have to ask her husband for money for things that she needs. This year she plans to open her own bank account—another step toward financial independence.

A loving mother, Naema wants to see her two sons Amine 28, and Nabil 26 and her daughter Wafaa 19 succeed and be happy. Despite the fact that her two sons have diplomas as welders, they remain unemployed and this weighs on Naema. She encourages her two sons to apply each year for the American immigration lottery and uses money she earns for them to pay for the application and necessary Internet use. After all, she wants to be a grandmother and her sons can’t start a proper family until they are employed. Naema also dreams of building a beautiful house to enjoy in her later years where her grandchildren can visit and she can sip mint tea as the sun sets. 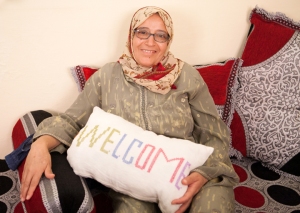 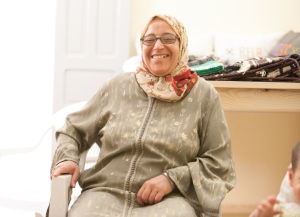 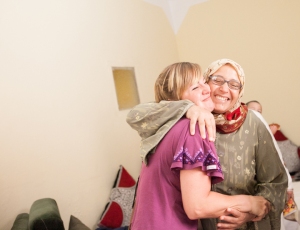 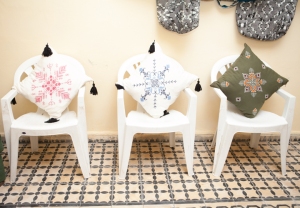