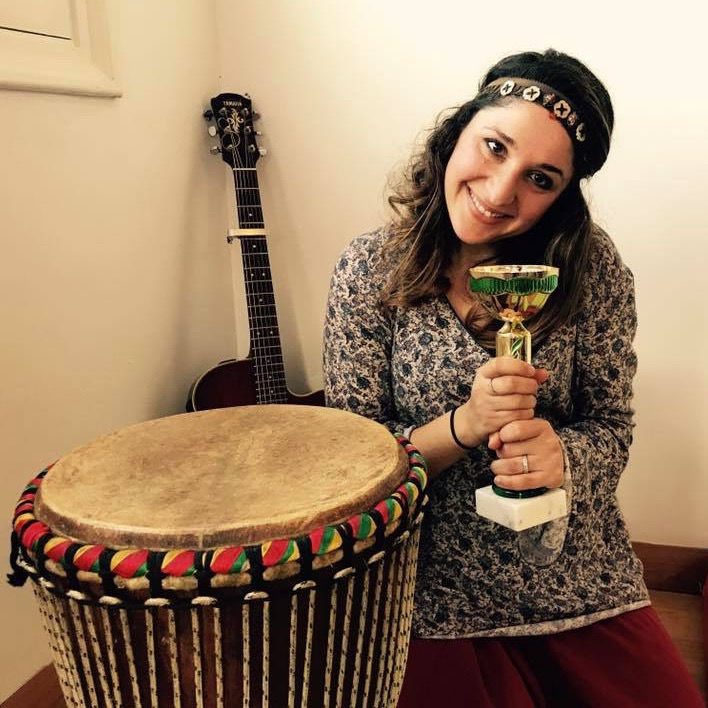 This month in Mushmina‘s continued effort to celebrate bold female entrepreneurs, we are proudly highlighting the illuminous Laila Lebbar, Founder of Crescendo Music and Theatre of Rabat, Morocco and beyond. Laila and her uniquely talented team travel all over Morocco creating delight and fun for children in the form of the performing arts and music. She is a ray of light and compassion and we are incredibly lucky to call her a friend.

One could easily say that Laila Lebbar is the unofficial mayor of Rabat and perhaps even of Morocco. As a parent, seeing Laila in action on stage with children and in her playful classes is like receiving a reassuring, happy gift. If you are ever lucky enough to have even a few minutes with her, you will see why this fierce young entrepreneur is an incredible symbol of hope and strength for her country and for humanity.

There are times you just meet someone who has an utterly magical spirit. Someone who has an endless enchanting charm; whose smile draws people in and who immediately radiates warmth and energy. On stage with her older students and in class with her wee ones, Laila dedicates herself full-force to the creative process. You will often find Laila and her team fully dressed in vibrant costumes, energizing family-friendly crowds; her boundless energy and her positive spirit is forever apparent.

Leila was always a musical child, she tells me. Growing up in Rabat, she played the piano and sang in a choir; encouraged by her non-traditional parents who always stressed education, the arts, and giving back over material goods. She explains thoughtfully, ‘My parents worked hard to find their success. They instilled a strong work ethic in me, as well as a deep respect for those who are less fortunate.’ She continues, ‘My mother used to say-I don’t want you to grow up caring about chraouet,’ which means ‘a piece of clothing’ in the local language of Darija. ‘She very much wanted her children to appreciate tangible things; therefore we always had this mentality of being mindful and appreciative of what we had.’

Even though Laila might not have known it at the time, the cosmos certainly had other larger-than-life ideas. In 2001, she ended up in Ifrane, north-central Morocco to pursue her studies at the University of Al Akhawayn, where Laila immediately began a choir. This little group that Laila named ‘Voices United’, went from a tiny club to a massively successful force that still exists on campus today, almost 20 years later. This undeniable love of performing music followed Laila unassumingly when she was a young university student, studying abroad, in of all places Bozeman, Montana, where she (of course!) joined the local choir.

After all, music is perhaps the global connector. And Laila is the quintessential uniting force. She can take a group of children without a common language and bring them together in laughter and learning through performing arts. Whatever the nationality, Laila has the innate ability to break down language barriers and unify kids in fun. This gift is rare and is only possible in the purest of ways. Laila is able to pull this off and in her classes, everyone communicates through the language of music. And inevitably warmth and friendship.

In 2011, Laila applied for and became a distinguished Fulbright scholar, studying arts management and music business at NYU for three years. She completed her rigorous master’s degree in 2014.

The ingenious and mindful idea behind the prestigious American Fulbright scholarship for students from overseas is that the awarded scholar must return to his or her home country; this is all part of the Fulbright mission of giving back.

Still, Laila had doubts about herself. She had years of musical experience, but creating and running a successful business was something entirely different. Although she had amazing mentors during her MBA classes who focused on encouraging entrepreneurship in females, she was not sure that she could pull it off herself. It took an epiphany with a dear friend (eventually becoming a trusted colleague) who convinced her that she actually did have the perfect mix. And she had such an incredible network of contacts in the performing arts world in Rabat. She could focus on music as her niche and she could hire a theatre expert as well as a dance teacher and it could not only work, but it could work perfectly.

Around the time, Laila felt profoundly affected by the horrific events in Syria and their effects on innocent Syrian children. She decided that she needed to do something positive to counter this negativity; something to bring light and love to children. In her words, ‘How could I transmit this message of inclusion and compassion?’ The answer was obvious.

In 2015, Crescendo Baby Class was uniquely born. From there, a cosmic momentum grew and today, Crescendo works with children up to age six and Crescendo Musical Theatre Rabat performed its first successful stage performance in May of 2018; the first musical theatre production for kids.

The inevitable thought would be that Laila would eventually move her family to the United States. After all, New York is where musical theater thrives and where Laila had established so many ties during her beloved time there. But this is exactly why Leila chooses to stay in Morocco. Because there is so little here in terms of musical theater and creative classes in Morocco for children and families. And really, what is here, is flourishing thanks to her.

It’s essential to note, Laila explains to me, an important part of Crescendo’s mission. She tells me earnestly, ‘Anyone who interviews to be a part of our team expresses a deep interest in volunteer work in both their history and their future.’  She continues, ‘It is my personal goal to have music therapy integrated into our work with Crescendo. This will take specific training and time and it is our next move.’

As Laila puts it, it’s as if pieces of a puzzle have come together over the years and she is exactly where is supposed to be. She is humble in talking about her accomplishments and accolades in regards to the changes that she has brought creatively to Morocco. ‘It’s about the whole process,’ she tells me over a hot cup of tea on a blustery cold October day in Rabat. ‘It’s not so much about the end result for me; although this is satisfying too, in regards to the performance, but it is about the importance of the growth and confidence learned along the way for these kids. Because music and theater and performing can truly be life-changing and applied to so many life lessons.’

Today, Laila is happily married to her college sweetheart and they have two gorgeous little girls together. Her daughters will clearly grow up with the inclusive sounds of music around them.

I remarked to Leila recently that although her spirit might be in New York City, clearly her heart is solidly here in Morocco. It makes sense. This is where she belongs. Family. Roots. Love.